Goldlink touched down at The Granada Theatre last night to perform an electrifying show, sponsored by KJHK 90.7 and SUA.

Goldlink is almost too talented. Almost to the point of being unfair to everyone else. Not only can he rap faster than 98% of the rappers in the game, he can sing and perform like a true pro. His style and his vibe elevate him from the rest of the genre. All of these components came together during his extraordinary live show.

Something that Goldlink is especially special at is his rapping ability. His toned down, mellow voice allows for his cadence to ride the beat so effortlessly. It’s like he’s running down directions of how to catch the E-Train so fast that you know you’ll get lost as soon as he finishes his sentence. His words form these parables and loops that are so infectious to listen to.

On songs like “Herside Story” he is able to dance over the melodic track and find flows I never imagined possible. He tells stories that are so relatable and his words are believable. On tracks like “Kokomoe Freestyle” he unleashes some of the fieriest bars on top of an absolute bruiser of a beat. This song is absolutely unreal, and could be any artist’s best song by a couple miles. When performing this song live, the crowd became unruly in the best possible way. Hands were flying in the air as every eye stayed on Goldlink, who delivered every word perfectly. The beat knocked hard like the next door neighbors when you play this song too loud.

It’s a testiment to how good Goldlink is that “Kokomoe Freestyle” is not his best song. That came at the end of his set. For his final song, Goldlink performed his biggest hit to date, “Crew,” a possible song-of-the-year choice. The melody on this song, the movie-esque sound, the chorus, which is catchy as hell, and Goldlink’s crushing verse played out on stage like an anthem. The crowd went absolutely ape for this song, rapping along to every word, singing the chorus like it’s a Weeknd song. They even knew every word of Shy Glizzy’s verse. Goldlink was so impressed that he performed the song twice in a row.

During his performance in Lawrence, Goldlink played through most of his new album, At What Cost, as well as some older gems. It was a vibrant and electric show that ended far too soon. He could have performed for another hour and the crowd would have eaten every song up like a snack. 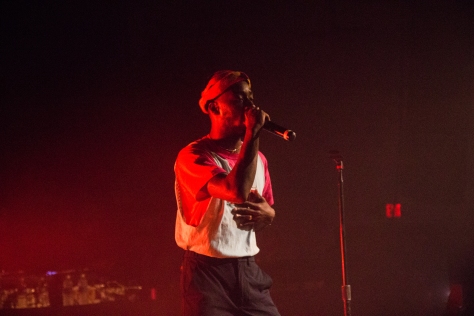 Goldlink is a rare talent, one that will be revealed in time. He’s already gained recognition for “Crew,” but his star path is on a major ascension. This guy is talented enough to be the next big thing, so don’t wait. See him when he comes to your town.