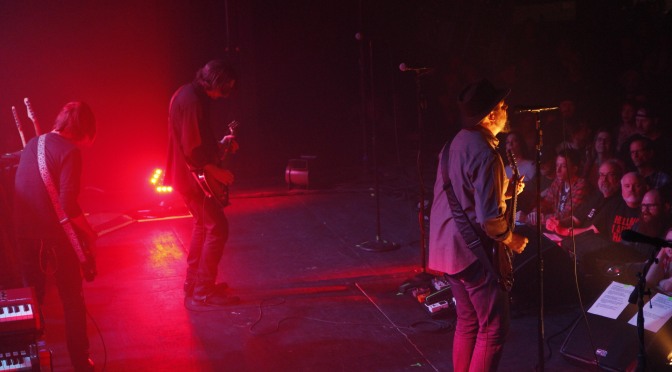 When taking photos of a rock show, it’s easy to be distracted by the band. These are the guys that are on stage, shrouded in fog and lights, slinging the expensive equipment, creating the sound. But there’s a moment, when you turn around, and take a look at the real rockstars: the fans. The folks who worked hard day in, day out, to buy a ticket to their favorite band’s show, got there early, wore their tattered t-shirt, and get to experience true effervescent, visceral joy. This joy dissolves all troubles in the world, just for a moment. This joy, this power that music brings, makes more sense to me than anything else ever could.

Drive By Truckers are a Southern rock/ alternative country band from Athens, Georgia, with a deep -fried Alabama sound. It’s the kind of crunchy, soulful, rebellious music that could soundtrack a dusty-road expedition, a cookout, maybe even a mild riot. That’s because this music just sounds BIG. It sounds like three guitarists trading solos, a bassist laying down heavy grooves, a heavy handed drummer, and two vocalists with pipes that can belt out with the kind of emotion that really moves people.

When DBT, as their fans know them, arrived in Kansas City, they carried a pride in their walk. It was a strut like they were so glad to be back on stage, and were ready to rock. Kansas City was their first show on their tour, and they had quite a bit to get off their chests. As singer Mike Cooley stated in a Rolling Stone interview, “These are fucked up times we’re living in.”

Written in a post-Trump era, the band’s latest album American Band, is their most political. Issues addressed in the music include gun violence, police brutality, political aggression against minority groups, and more gun violence. Scrawled on one of the amps onstage is a sign: “Black Lives Matter” written in all caps.

The weight of the music comes across in the live performance. The band, notably one of the more outspoken among their musical peers, dares to be bold. They dare to challenge their audience. They dare to wear their believes on their sleeves and play through songs like “Surrender Under Protest” and “Filthy and Fried” not because they are easy, but because they are hard. It is absolutely necessary to occupy this vital stage time breaking down the issues the band sees in America, while still providing a raucously fun rock show. Honestly, I don’t know how they do it, find the balance.

The show was one of those reminders that music is the most powerful instrument for change ever created. It’s always been a method for expressing our deepest emotions, happy or sad, exhilarated or disheartened. It can be heavy as a brick or light as a breeze.  It can connect things or tear them apart. But no matter what the content, the feeling it creates in those who play it and those who listen it, is what keeps people going. This couldn’t be more true than when you turn around and notice those smiling, singing faces all around you, united, even for a moment in the sound.