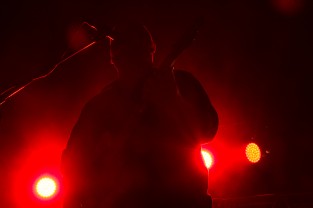 Some rock bands weren’t meant to last. The Smiths, Girls, Oasis. The hours spent arguing over E-chords over G-chords and crammed in a van can rip apart bands more quickly than an STD. Then there are bands that, defiant in the face of unrelenting conflict, persist.

Last night, one of these persistent groups, The Pixies, put on an absolute ripper of a show at the Midland Theatre in Kansas City. They performed an absurd number of tracks, played back-catalog tracks with impeccable skill, and kept the crowd captivated for nearly 2 hours.

The Pixies are indie-rock royalty as far as I’m concerned. And to a nearly sell-out audience, their no-bull shit rock shows are a must-go event. The amount of hits they’ve racked up, including the easy 10 on 1989’s Doolittle alone, make for an unbelievably interesting concert experience. They have at least another 20 hits on other albums, and just relased a new record. All and all, they played 34 songs. Unheard of.

Black Francis, the mastermind of the group, held up like a fucking champion the entire show. He was funny, yet brief with his comments- he and the rest of the band, chugging right along with song after song.

Of course, there were the heavy-hitters. The tracks that got everyone in the venue excited. “Where Is My Mind?,” “Wave of Mutilation,” and “Hey” all were stunningly performed with skill and uniqueness. As I would expect from a band who has played these tracks upwards of 10 million times.

My favorite of the hits was the stellar rendition of “Here Comes Your Man.” It was thrilling to see the song performed live finally, as I’ve loved it for years, and consistently sing it in karaoke, hoping to sound half as good as Joseph Fucking Gordon Levitt and win over a Zooey Deschanel

Since then, everything she has done has been stellar, and absolutely nothing less. Her bold and excellent sophomore album Puberty 2, was atop my best albums list of 2016.

During her stop in Kansas City, she certainly proved her awesomeness with each and every song played. Each track garnered more applause and cheering than the one preceding it.

The entire show was a display that indie rock is still alive and well. Further, there are thousands of people who love The Pixies. The Pixies too proved that they love their fans and are capable of playing and sounding like they’re 30 still.